Trying to follow Buckminster Fuller's example in life, one step at a time to bring you brain scrapings for a new millennium.

Bloc.2012, or How I Learned To Stop Worrying and Love The Queues

It was the afternoon in London and the excitement was palpable. Amongst the besuited office workers winding their slow way home on the DLR were a smattering of ravers humming with anticipation at the prospect of a night of booze, electronics and disco biscuits. That smattering grew to a deluge, as ravers started pouring through Bank and the DLR to be dumped outside The London Pleasure Gardens for Bloc Weekend 2012. The afternoon started well, but culminated in the Bloc.2012 festival being closed, the Police being called in to evacuate people from the site and talk of recrimination and bankruptcy.

At around 8pm the queue to get in was already winding along the length of the site and spilling out into the road with the Police in evidence keeping people from blocking traffic. We were lucky enough to source Express tickets which meant we didn't need to queue and managed to skip the two hour wait to get in. As we paused for security to hand out our wristbands someone looked back at the huge queue and said, "the best 25 quid I ever spent", which was the difference between the standard weekend pass and the express pass. The security looked competent, scanning the barcode on our printed tickets, fixing our wristbands and getting us into the site after a bag search and wanding for pointy metallic implements. As we entered, there was another two to three thousand people still in the queue behind us to get in.

Walking onto the site, I was pleasantly surprised at the vista infront of us, with the fairground waltzers off in the distance and what looked like the makings of a decent festival surrounding us. It was only after stopping to work out where everything was that alarm bells started ringing. The entire site was shaped like a horse-shoe, with pretty much all of the music and events crammed into the tip of one of the ends of the shoe. Looking at the London Pleasure Gardens' site, they touted it as a 35000 person capacity venue, which we can only assume would be if the entire site was full of people. As it was, there was almost nothing going on over on the left hand side of the horse-shoe, and a twenty minute walk to get around there to a couple of small bars which would have accomodated a few hundred people at best. According to the map, shown below, there was supposed to be a pontoon bridge across from the main entrance which wasn't there on the night further concentrating everyone into a small section of the venue on the right hand side. We were informed that around 20000 tickets were sold for the event, and due to the layout almost all the people from that cohort who made it in would have found themselves in an area that could uncomfortably house around 2000-3000 people at best. 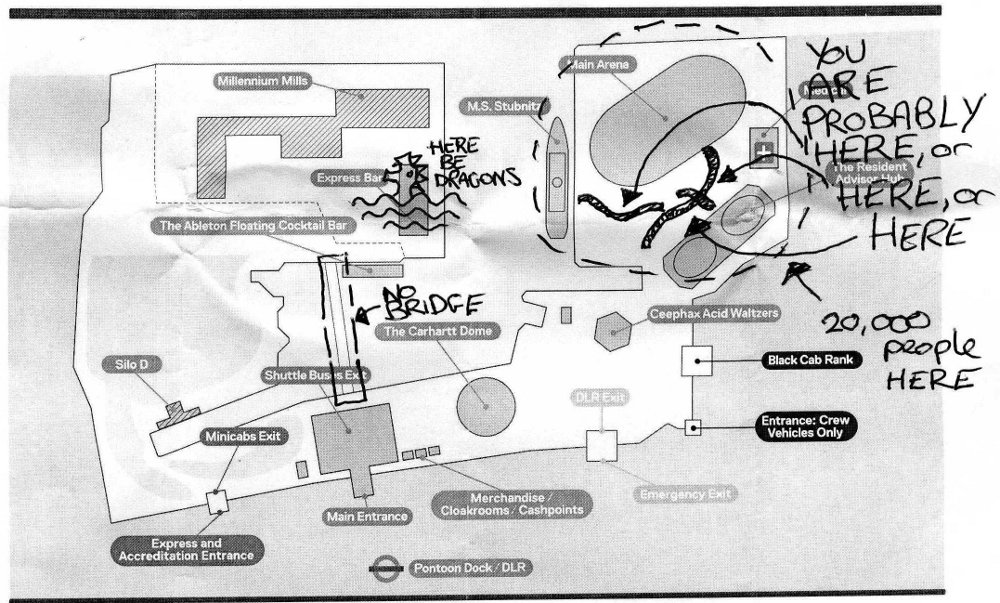 Amon Tobin was originally slated to play at 9pm in the Main Arena before being moved to 8:30pm, so we trudged through what was thankfully relatively dry dirt to see him only to be faced with another massive queue which we dutifully joined. After another 30 minutes queuing and missing the start of Tobin's set we realised that there was another entrance for express ticket holders and we managed to catch the last hour of his amazing audio-visual experience. All this time the queue was still fully populated, with most of the people there only able to hear a mess of sound from the events going on around them. Most of these people will have stayed in the queue, hoping that natural attrition for toilet breaks would get them inside to see MF DOOM later on. At this point with the tide of humanity getting high and the all the stage areas fully packed and operating on one-in-one-out we headed to the unpopulated realms of the Express Bar to take a breather. On the way past the entrance we could hear massive boo-ing from outside the site, which we later learnt was due to people being told that they would no longer be let in ticket or no.

After recuperating in the Express bar for a short time a few of our cluster decided to call it a day after contemplating the queues seen earlier, leaving a handful of hardy ravers to chance the crowds for Sandwell District. As we approached the other tip of the horse-shoe we encountered a solid mass of people, and a barrier with Police on the other side. The sheer numbers crammed into that small area was dangerous, with a real chance of people being crushed, so the organisers were shutting down the site and calling the Police in to evacuate people. We'd already commented that the event felt massively over-sold, and we can only be thankful that there was no rain which would have turned the entire site into a mud bowl and made an already dangerous situation worse. We managed to get the last DLR and Tube home, but from what we have been told, those behind the barriers weren't informed about what was happening.

From what we can gather Snoop Dog's set was cancelled, and the crowd told through a loud-hailer that it was due to "technical problems", leaving the mass of people in and around the arena waiting until there were enough Police outside to lead the crowd out safely. Unfortunately by this time there were no more DLR or Underground trains, and a small number of shuttle buses which were dropping people in Canning Town instead of Liverpool Street leaving most of the remaining crowd to wander the streets and make their own way back. All through this time there was no information from the organisers as to what exactly was going on and whether the event would be continuing on Saturday (the Saturday events were later cancelled and an update shown on the Bloc website.)

In the cold light of morning, the event looks like it was a massive fail, with hundreds of people complaining across social media, #bloc and #bloc2012 trending on twitter and nearly a thousand comments on their facebook page within a few hours of the closure of the site. Thankfully no one was seriously injured, but there will be recriminations across the board for this, starting with a full refund for all ticket holders, across to artists being paid and the local council and Metropolitan Police needing to rock up mob handed to evacuate people from the event safely. Good luck to the Bloc team, I can only hope you'll get a chance to make amends for the craziest festival experience I've seen in Britain in years.