Trying to follow Buckminster Fuller's example in life, one step at a time to bring you brain scrapings for a new millennium. 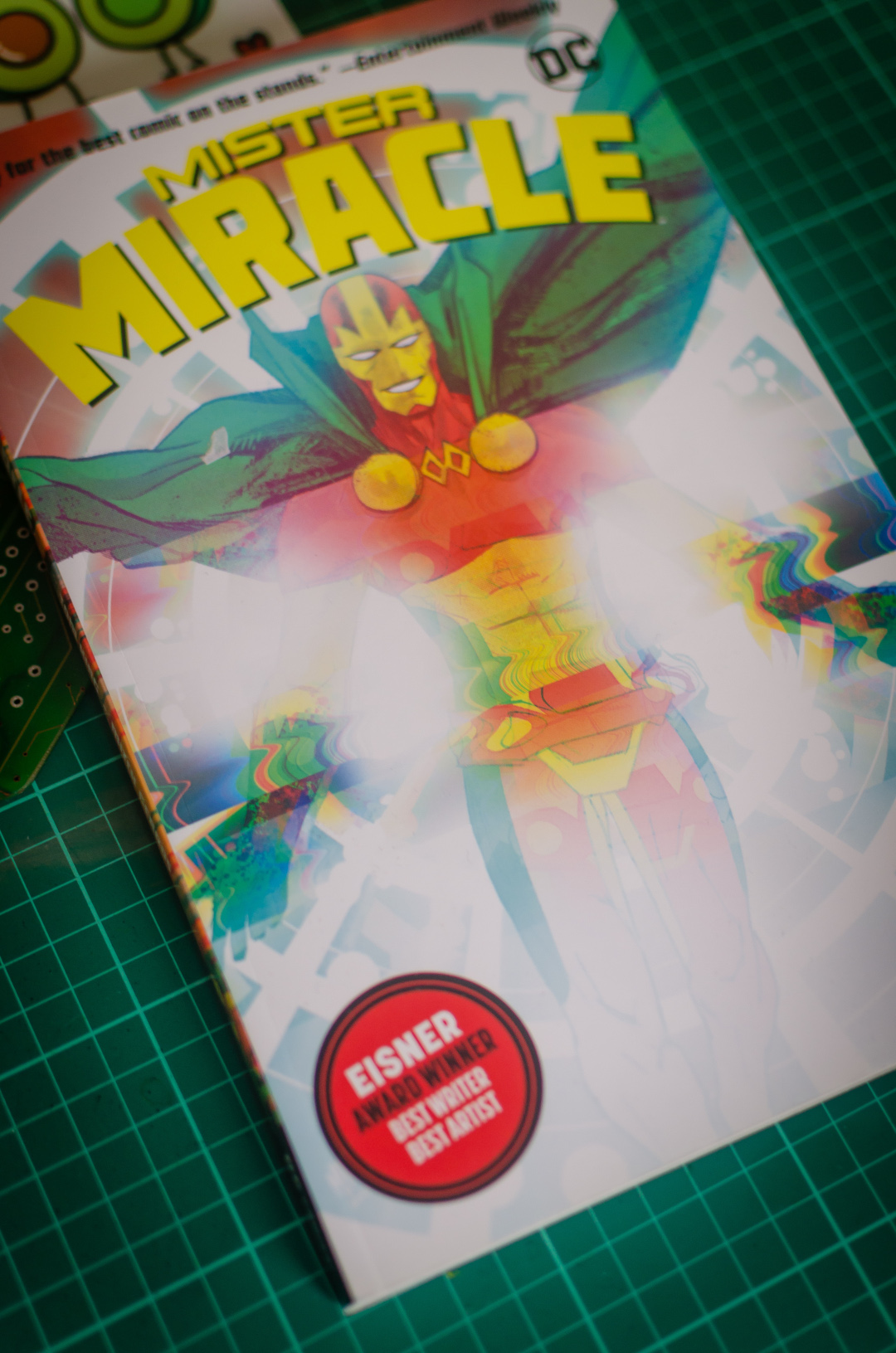 Before reading this, I didn't know much about Mister Miracle, other than he was a creation of Jack Kirby, and perhaps part of his New Gods story. I didn't really know what the New Gods mythos was about, other than it involved Darkseid at some level. My main reads tend to swerve DC output, bar consuming their Vertigo line, the Bat, and the odd Superman graphic novel (like Morrison's All-Star Superman and Superman Red Son which are both superb.) I picked up the TPB of Mister Miracle, on the strength of Tom King's Vision and his Batman run... I haven't read much with pencils from Gerads, but his work on this was awesome in its execution.

The basic premise then; there is a technologically advanced civilisation, New Genesis, with a god-like technocrat, The Highfather at the helm, and its antithesis, a twin planet Apokolips, overseen by Darkseid. Darkseid, wants to remake the universe in his own image, remove all freewill, and strives to rediscover the Anti-Life Equation which would destroy all hope and pave the way for his grand ambition. New Genesis, stands in his way, and his armies from the hellscape industrial realm of Apokolips become locked in constant war with The Highfather's forces, causing severe losses on both sides, until a detente is agreed. As part of the deal, The Highfather would give his son to Apokolips as his heir, and vice versa. Orion, brought up by The Highfather, becomes a War God, leading the defence of New Genesis against his father, Darkseid. Scott Free, son of The Highfather, is thrown into the pits, to be annealed by torture and abuse into the Apokolipsonian God Of War, instead, becoming The God of Escape. Scott, soon to be Mister Miracle, absconds to Earth with the Fury, Big Barda, with whom he has fallen in love with.

Mister Miracle starts sometime after this, with Scott, possibly encountering The Anti-Life Equation, and trying to break the cycle of Samara in a more visceral, and destructive manner. The story deals with some heavy topics; inescapable cycles, family, abuse, striving for happiness against adversity, and the kindling of hope from small embers. Cycles and repetition are used to pull the curtain back on the reality of a life framed by heroic adventure, when you have leaders throwing the flower of your civilisation into a meat grinder to fulfill the needs of a monster. The background has notes of Oedipus Rex, framed by art which brings to mind the mind bending psychedelia of Gaspar Noe's Enter The Void mixed with Edward Hopper's "Nighthawks". The use of a 3 x 3 pp panel layout drives you through the story like a ratchet and makes the few elements which break the rule stand out even more.

Last year saw the release of the rather splendid Mister Miracle Deluxe Hardcover which collects the complete series. I'd absolutely recommend spending some time communing with this.